We sell only state-of-the-art cleaning and disinfenctant solutions that are safe for humans, animals, and the environment.

We are an Authorized Distributor for the top-of-the-line onsite Electrochemical Activation (ECA) Generator which produces a non-toxic, biodegradable, safe-to-use, fast-acting healthcare-grade disinfectant and cleaner. These solutions eliminate pathogens which include harmful bacteria, viruses, and fungi.  They are eco-friendly, and clean and degrease surfaces as well.  This product is EPA registered.

This disinfectant and cleaner eliminate the need for multiple chemicals and work together for safe, easy to use application in healthcare and commercial facilities.  These solutions work very efficiently with our SOTERIA Handheld Electrostatic Sprayer and dry wipes and wiper buckets with lids. 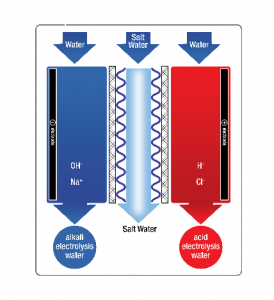 The generator utilizes electrolytic cells where the anode chamber is separated by a unidirectional permeable membrane from the cathode chamber. This allows migration and separation of the ions to prevent the production of gaseous chlorine (CL2) while generating large volumes of neutral pH HOCL that is highly biocidal, but has a very low chemical load as compared to Sodium hypochlorite.

Positive ions (cations) are drawn towards the cathode where they receive electrons from the electron-rich cathode to form sodium hydroxide (NaOH), a cleaning fluid with the ability to reduce bacteria and pathogens.

At the anode, negative ions (anions) are attracted and surrender their additional electrons to the electron-depleted anode to produce hypochlorous acid (HOCL), a powerful disinfecting fluid which has superior germicidal, biocidal and sporicidal properties that can eliminate pathogens such as Methicillin-resistant Staphylococcus aureaus (MRSA), Vancomycin-resistant Enterococci (VRE), Human Immunodeficiency Virus Type 1 (HIV-1), and more.

There are very many reactions that occur when water (H2O) is electrolyzed, for example (E0 is the standard redox potential):

The addition of sodium chloride (table salt) leads to the following additional reactions:

Generated HOCL is manufactured with validated devices and processes in accordance with EPA and ISO standards.

Several parameters can be measured in order to establish the shelf life of HOCL. These include pH, ORP, EC, salinity and FAC (Free available chlorine). The FAC of most generated HOCL’s prove to be unstable and easily evaporates from the water causing an immediate, strong chlorine smell and complicating storage, transport and usage. Produced HOCL is stable and ready to use for months. 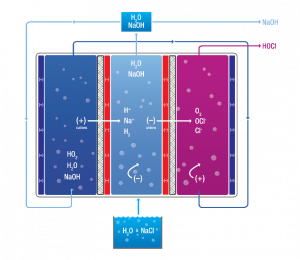 The mechanism of action in which HOCL eradicates these various micro-organisms is well documented by third party resources. The mode of action is as follows:

The free ions in HOCL rapidly react and denature proteins. HOCL should not be used on protein based products, since it will react and destroy the proteins. Once HOCL comes in contact with a microorganism, it attacks the bacterial proteins located in the cell membranes.
The superiority of HOCL is in that it will eradicate similar antibiotic resistant strains including MRSA and VRE. Secondly, because of the osmolality difference (the conc. Of ion in the solution versus in the cytoplasm), HOCL will induce a rupture on the cell membrane leading to cell lysis.

No evidence of toxicity in any form has been observed in any independent laboratory testing. Based on all this information, it can reasonably be concluded that HOCL is non-toxic and safe to use in both healthcare and commercial spaces.

Generated HOCL is pH neutral, super-oxidized water generated by electrolysis of a dilute salt solution passing through an electrolytic cell. This process creates large volumes of a gentle but extremely potent antimicrobial solution capable of rapid reduction of bacteria, viruses, spores, cysts, scale and biofilm. HOCL is stable, cost-effective to produce, greener than traditional chemical technologies and can be used in multiple applications across a wide variety of industries.

HOCL is an oxidizing agent due to a mixture of free radicals, giving it an antimicrobial effect. Studies have shown that HOCL is highly biocidal and can substantially reduce pathogens such as Salmonella and E. coli without the use of costly toxic chemicals. In addition, it offers the added benefits of being able to remove biofilm and scale from manufacturing equipment, thus, greatly minimizing a major contributor to contamination problems.

Because HOCL effectively destroys microorganisms, they cannot build up resistance to HOCL as they can to other sanitizers and disinfectants. Standard toxic chemicals can create strains of pathogens that become resistant over time because the cell can expel or neutralize the chemical before it can kill it, thereby causing the overall efficacy of chemical cleaners and disinfectants to be significantly reduced.

Effect of pH on the ratio of free available chlorine.

The rate of dissociation of HOCl is so rapid that equilibrium between HOCl and the OCl- ion is maintained even though the HOCl is being continuously used. For example, if water containing one ppm of titratable free available chlorine residual was introduced into it a reducing agent that consumes 50 percent of the hypochlorous acid, the remaining residual will redistribute itself between HOCl and OCl- ion.

A common myth is that when HOCl is used to disinfect water only OCl– remains. In reality, when HOCl is used, OCl– immediately converts back to HOCl to maintain the percentage division mandated by the pH.